Top
Our Airbnb is now open!
Book a stay!
0 shares 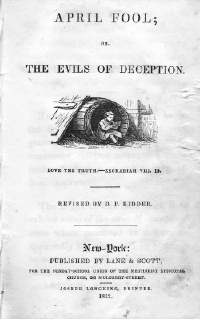 This History of April Fools day is very interesting in 1582 King Charles 1X moved the New year from the week of March 25 – April 1st to January 1st. The problem was the people of this time were not as hooked up or connected as we were today. So some people celebrated on the Original date of March 25- April 1 and others who were more informed celebrated on January 1. The King heard that people were still celebrating on the old week of new years and he called them fools! These people were labeled as Fools and were sent invitations to phony parties, events and all sorts of other activities. The people who had been pranked became known as a “poisson d’avril” or “April fish” because a young naive fish is easily caught. However, the most common of all pranks  was to hook a paper fish on the back of someone as a joke.

This harassment evolved over time and a custom of prank-playing continue on the first day of April. This tradition eventually spread elsewhere like to Britain and Scotland in the 18th century and was introduced to the American colonies by the English and the French. Because of this spread to other countries, April Fool’s Day has taken on an international flavor with each country celebrating the holiday in its own way.

In Scotland, for instance, April Fool’s Day is devoted to spoofs involving the buttocks and as such is called Taily Day. The butts of these jokes are known as April ‘Gowk’, another name for cuckoo bird. The origins of the “Kick Me” sign can be traced back to the Scottish observance.

In England, jokes are played only in the morning. Fools are called ‘gobs’ or ‘gobby’ and the victim of a joke is called a ‘noodle.’ It was considered back luck to play a practical joke on someone after noon.

In Rome, the holiday is known as Festival of Hilaria, celebrating the resurrection of the god Attis, is on March 25 and is also referred to as “Roman Laughing Day.”

In Portugal, April Fool’s Day falls on the Sunday and Monday before lent. In this celebration, many people throw flour at their friends.

So, no matter where you happen to be in the world on April 1, don’t be surprised if April fools fall playfully upon you.